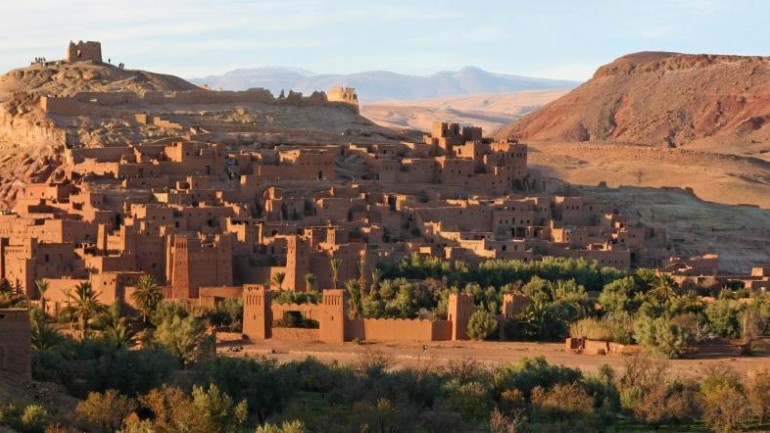 Ouarzazate is a newer town, known for its film studio where Hollywood filmmakers have shot films such as Lawrence of Arabia, Astérix and Cleopatra.

The minimum number of travelers is two. If we do not receive any other booking 3 weeks prior to the start of your tour, we will have to cancel it, unless you want to make it a private tour (contact us for more details).

The road climbs, offering unrestricted view of the region, until to reach the Tizi n’Tichka pass (2260 m which is always windswept and sometimes closed by snow during the winter months.

Ouarzazate is a newer town, known for its film studio where Hollywood filmmakers have shot films such as Lawrence of Arabia, Astérix and Cleopatra. A number of film sets still remain at the Atlas Corporation studios.

Kasbah Taourirt: 1 km from the centre of town, this Kasbah was constructed by the Pacha El Glaoui. Recently restored, it is remarkable for its painted wood ceilings and offers a superb view over the oasis and lake of the El Mansour Eddahbi barrage.

Kasbah Ait Ben Haddou: 30 km outside of Ouarzazate, a road leads to this Kasbah which is one of the most beautiful in the Atlas region, this Kasbah has been designated a World.exploring the UNESCO world heritage site of Ait Benhaddou, used as a backdrop for shooting more than 20 films and was one of the most important fortress strongholds on the old Salt caravans route where traders brought slaves, gold, ivory and salt from Saharian Africa to Marrakech and beyond. after lunch in the Kasbah you’ll visit the old Pacha Glaoui kasbahin Ouarzazate. This kasbah has an amazing story behind, intrinsically linked to the formation of Morocco as a country in the 20th century. after this we’ll take you on a visit to the Atlas film studios where films such as the Mummy, Gladiator, Lawrence of Arabia etc. have been shooted. Recommended year round.

Our Most Popular Treks

Morocco 1 Day
€40.00
The Essaouira Day Excursion will take you from Marrakech to the port of Essaouira.
View Details
Available through out the year:

Morocco 1 Day
€60.00
Walk over the Kik Plateau an unforgettable place with stunning views of the mountains and valleys and very popular with Para gliders.
View Details
Available through out the year:

Horse Riding In The High Atlas

Morocco 1 Day
€85.00
Horse riding in high atlas mountains.   The minimum number of trekkers is two. If we do not receive any other booking 3 weeks prior...
View Details
Available through out the year: